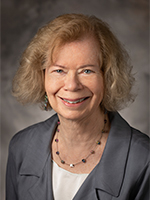 Dr. Henrich received her medical degree from the University of Michigan.  After clinical training in Boston, she served as Medical Director of the Medical Outpatient Clinic at St. Elizabeth’s Hospital.  Upon moving to New Haven, she was the Medical Director, Internal Medicine, at the Hill Health Center, the first federally funded community health center in Connecticut, for four years.  She then joined the faculty of the Department of Internal Medicine at the Yale School of Medicine where she is an active clinician educator.  Dr. Henrich has a longstanding interest in women’s health.  At Yale, she directed one of the vanguard National Centers of Excellence in Women’s Health, designated by the U.S. Department of Health and Human Services, and helped create interdisciplinary women’s health education and teaching models.  At the national level, she served as Special Assistant to the Center for Population Research at the National Institutes of Health and, with colleagues at other government agencies and policy-making organizations, made recommendations to Congress on women’s health education and training.  She served as Master of Trumbull College, Yale University, from 1997 to 2013, and is co-Founder and Faculty Advisor to the Yale College Living History Project, in association with Yale-New Haven Hospital.