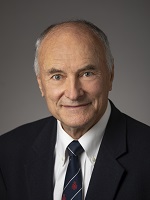 Mr. Vogel is now retired after serving as Director of Development for the National Rowing Foundation. Prior to that, his career covered almost 4 decades at Yale University in fund raising, alumni relations and athletics. This included twenty-eight years as a head rowing coach. He has held many national positions in the sport of rowing including president of the national governing body, USRowing, and president of the Casitas Fund endowment. He currently serves on the board of the Yale Crew Association.