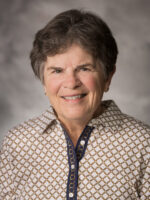 Ms. Hawkins is a Whitney Center resident. She was born in New Haven Hospital, worked as a candy striper at Grace-New Haven Hospital and as a barely trained nurses’ aide at Yale-New Haven Hospital. She got her BA from Vassar College, married, and lived in California and Brazil before returning to Connecticut. Ms. Hawkins and her husband Harold raised their family in West Hartford, CT where she volunteered in activities that involved their children. When the youngest of the three was in school full time, she went back to school, to SCSU, to earn her masters of library science. One volunteer position, in the local middle school library, turned into a full-time teaching position. There is no better job than one that pays one to order books and to read. She also served on the board of the Foundation for the West Hartford Public Schools, from which she had received their first and several grants. Interest in technology led to her volunteering at, and serving on the board of, WHC-TV, West Hartford’s local access television station. She retired in 2006.